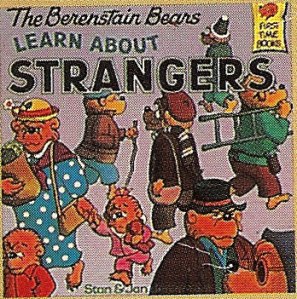 I have a confession: I’m afraid of the make-up ladies in SuperPharm. It doesn’t matter which branch; they are all the same to me.

Downtown Jerusalem at 21:47 on a Sunday just looks downright seedy in general. Everyone appeared shady tonight, just like a page out of the Berenstain Bears book about strangers. For example, everyone stopped, turned and stared at me when I approached the bus stop- after missing two of my buses- with empty, yet prying looks in their eyes. A man walked too closely behind me after I’d stepped off the eerily slow train. I stopped in my tracks and walked in the opposite direction. (Reading about international sex trafficking, forced prostitution, and systematic rape as a weapon of war has got me paranoid…though it’s a fascinating and inspiring book otherwise.)

Maybe I was just tired. Today was a big BOO in my book and I was threatening tomorrow to be better.

My only consolation, as I approached my home- much later than I’d intended- was a woman who smiled at me as we simultaneously crossed the street. Somehow, in the seconds that we waited across from each other at the traffic light, we bonded. Perhaps it was the way we both had shoved our hands deep into our coat pockets to brave the Jerusalem winds: Me, in my teal patchy fleece with the elfin hood, her in her llama colored woolen jacket tied at the waist with a dark brown accented sash.

And yet, I knew there was undoubtedly something strange in this evening (even in the day co-workers spoke of the surreal feeling and I’d had trouble focusing on people during meetings, suddenly sensitive to the wall colors behind them) when I saw a pair in their early twenties behaving like teenagers under the influence of something walking smack in the middle of Hebron Road, which is busy even after 10pm. As I heard no screech of tires or smacks against the pavement, I can assume they survived…

Another strange man tosses a creepy glance as he passed me.

I’m almost there. “Mazal tov” is scrawled in colorful chalk on the brick sidewalk leading up to my apartment building; an arrow points straight towards the door of my entrance. ‘Stranger than a yellow brick road,’ I thought. If hadn’t lived there, I wouldn’t have gone in…not tonight.

Not my usual, but hey, gotta keep it real; there will be sunshine in the morning.

I was told that I was haunted. Now I know it’s true. The thoughts creep under my covers and snuggle up with me in the bed; they whisper ideas that threaten me with evaporation should I dare not get up, 55 minutes past my bedtime, and write them down. Just as I’d begun to think that there was no way I’d write a post a day but I would try for the once a week challenge and this blog is supposed to be about only poetry anyway.

This is not the first time. It was the one of many when I told a wise friend that I can’t sleep sometimes because I am writing or creating that she told me I was haunted. By what? She wouldn’t say…but I knew. And now I won’t say either for the purpose has been fulfilled (but if you pay attention, you’ll hear about it one day in a song).